A tale of three emergencies (and the responses)

You’ve probably heard of the Covid emergency and no doubt you’ll be aware of the emergency measures throughout World War 2. The UK Environment and Climate Emergency, though, receives significantly less attention. The motion declaring an Environment and Climate Emergency was signed on May 1st, 2019. However, there is no legislation that compels Government to enact legislation, which you might expect in accordance with the concept of an emergency. Six MPs (none of them Conservative) have sponsored The Climate and Ecological Emergency Bill, which tries to commit the Government to action. This was tabled in September 2020 but has not got beyond First Reading.

The chart below shows the range of responses to WW2 (which we wouldn’t disagree with) and then how many of these have been responses to the other “emergencies”. Some of these like the small amount of rationing under Covid weren’t Government responses but ended up being instituted by some stores owing to panic buying. While some of the responses to WW2 may be inappropriate for the Covid emergency, they could certainly apply to a climate emergency. 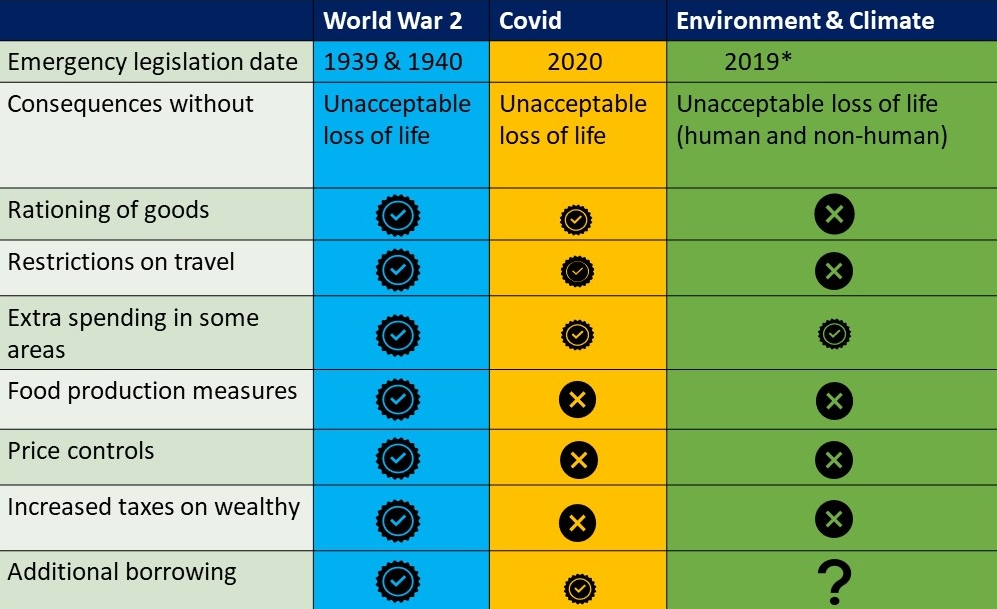 Essentially, using the metaphor of a real emergency, Government responses to the three emergencies can be summarised as follows:

• Covid – we call an ambulance. We should have made more provision, so there aren’t always sufficient ambulances and drivers and hospital staff. However, we made some provision. The roads aren’t always clear because it’s also important to allow others the freedom to use them.

• Climate Emergency – we believe we should call an ambulance.

Agree or disagree? Let me know via the Comments section below. Also, feel free to share on social media via the buttons below.

1 thought on “A tale of three emergencies (and the responses)”