Sometimes it’s been leading the news (pre-Ukraine), sometimes it hasn’t. It’s thought by some that the Covid pandemic response may have been the difference between Trump losing and being re-elected in 2020 (see this Independent article).

And here in the UK? It’s not until relatively recently that the Tories have relinquished their significant lead in the polls during the Covid period. Is the level of Covid deaths, here, anything we should be more exercised about?

See the chart below. There are three main indicators used. The main differences between the Government and ONS definitions of Covid deaths are explained on the ONS site.

Excess deaths figures are calculated by Office of National Statistics (ONS) and are explained at the bottom of this article (Note, I have not found a more recent figure than December 2021 for this). 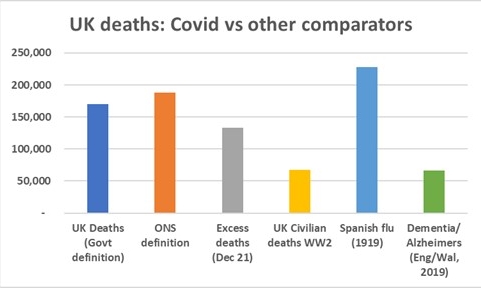 So, have we become inured to the daily death tolls? Here are some of the things I’ve heard people say, along with why I think we should be more angry.

Are these really big numbers? After all, 170,000 is still only 0.25% of the population. Yes, they are big numbers. Around half a million people a year die each year in UK, so the “Excess Deaths” figure above (around two years’ worth since March 20) suggests that we’ve had around 65,000 (13%) more deaths per annum than normal in the UK. The largest single cause of death in 2019 (i.e., before Covid figures muddied the waters) was Dementia/Alzheimer’s with around 66,000 deaths – a number that is not far off the excess figures from Covid; i.e., significant.

Would nearly all or most of these people have died anyway from other conditions? Again, this is not what the Excess Deaths figure shows. This shows we’ve had around 130,000 more deaths than we might normally have expected in the last two years. I accept that we’re probably entering a period where the excess deaths will be a little negative (rather than positive) and that we’ll never get a full understanding of the exact impact of Covid on death rates until a number of years down the line. However, a number like this, well in excess of 100,000, is still a sobering figure.

We’re no worse than any other country. This is not the case (see chart below based on data from Johns Hopkins University. There are some variations in how Covid is recorded but we are still likely to be worse than the European average and certainly worse than all the other major Western European countries, apart from Italy (who experienced early Covid deaths with the least warning). 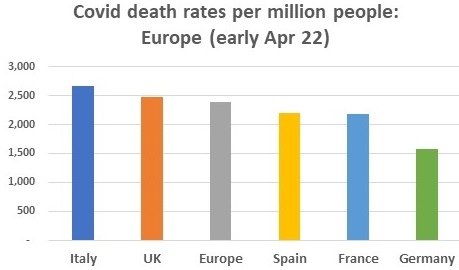 However, until the recent revelations of the “Covid party season”, none of this seems to have registered that much on voters’ radars.

Footnote – Excess Deaths definition (ONS)
For excess deaths, we compare numbers and rates to a five-year average; this ensures that we are comparing like for like in terms of life expectancy, advances in healthcare, population size and age structure. Averaging over five years removes the fluctuations seen year-on-year. Usually, we use the most recent five years, for example we compared deaths in 2020 with the five-year average for 2015 to 2019.